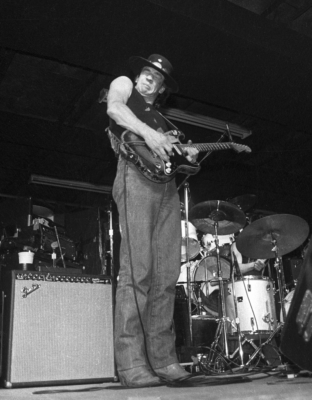 This interview took place in the hours before Stevie Ray’s performance at the Mid-Hudson Civic Center in beautiful downtown Poughkeepsie. I arrived right around soundcheck time, 5:30, about 2 1/2 hours before the show. Unbeknownst to me at the time, Stevie has just recently survived a near-death experience; the severe drug and alcohol addiction that nearly took his life had been kept very quiet. It had been about six weeks since he’d left the London rehabilitation clinic of Dr. Victor Bloom (Dr. Bloom had previously helped Stevie’s friend Eric Clapton to quit drinking), after which he checked into the Charter Peachford Hospital, in Atlanta, for a three and a half week stay. This Poughkeepsie performance was just Stevie’s eighth “dry” show.

Understandably to me now–but confusing to me then–the backstage vibe was very tense. Stevie’s road manager was barking orders at everyone. But when I finally sat down with Stevie, he was generally in good spirits, though his energy level was low. He was quiet and thoughtful, and, at times, startlingly candid. We did, however, begin with a little ten-minute jam on a mid-tempo shuffle–just he and I through a small practice amp. It is a moment I’ll never forget.

STEVIE RAY VAUGHAN: It’s one of those days, the sleepy kind. It’s cold outside.

ANDY ALEDORT: How was the Radio City show the other night [the pre-Thanksgiving shows in N.Y.C. on November 26th, 1986]?

SRV: Oh, it was fine. It was fun. Most of our equipment is falling apart. [Stevie plugs in his main guitar, “No. 1,” and starts playing.] Oo, I’m outta tune!

AA: What year is that guitar?

AA: How long have you had it?

AA: Did it look like that when you got it, or did the previous owner treat it better than you do?

SRV: I don’t treat it bad! It’s just been around.

AA: Stevie, how did you first get started in music?

SRV: When I was real young, [country & western swing legends] the Texas Playboys hung out at our house all the time. My parents played “42,” and they’d come over and get drunk.

SRV: Dominoes. “42 to 84,” “Low Boy,” “Nello”.” Those guys hung around a lot, they’d do some playing, and we’d hear their stuff. Mainly, we’d hear them talking about it. There were a lot of characters hanging around.

AA: Were [Texas Playboy guitarists] Eldon Shamblin or Junior Barnard among the guys who’d come over?

SRV: Oh, god, I don’t remember their names. I was a little beefheart. [laughs] Every once in a while, my dad would yell [in heavy rural Texas accent], “Hey, Jim, Steve, come out here and show them what you can do!” And we were little midgets, with guitars hangin’ on us that were this big!

AA: How old were you when you first picked up the guitar?

SRV: Seven. The first guitar I had was one of those Roy Rogers guitars; it had pictures of cowboys and cows on it, some rope. I had a blanket that had the same shit on it, too.

AA: Did you sleep with the guitar and the blanket together?

SRV: Yeah! [laughs] I still sleep with my guitar, when my woman ain’t around!

AA: Do you remember the first records that you listened to?

The first record I ever bought was “Wham,” by Lonnie Mack, from 1963. I’m glad it wasn’t the Monkees. [laughs] “Wham” was a great record. I played it so many times, my dad broke it! He got mad and broke it because I played it over and over and over and over. When I didn’t think it could be any louder, I went and borrowed somebody’s Shure Vocal Master P.A., put mikes in front of the stereo speakers, and then turned the P.A. up! It was loud in my room.

AA: And there went your records.

SRV: Not long after that. Every time he broke it, I just went and got another one.

AA: What did you pick up from listening to Lonnie Mack?

SRV: A lot of inspiration, I can tell you that. Between listening to that guy’s feeling in his music and watching my brother, and how much feeling he had with it, I mainly just picked up big time inspiration. What I was getting out of it wasn’t so much technical or anything; just the thought of them playing made me want to jump up and play.

AA: The spirit of it is what affected you the most?

AA: What were the bands Jimmie was playing in back in those early days?

SRV: He had several bands, such as the Swingin’ Pendulums, and he was with Sammy Laurie and the Pentrations. You know the song, “Penetration?” It was pretty cool. I can’t remember how it went. I’m a little cleaner nowadays than I was for a few years. My memory kind of went pffft!

[Guitarist] Johnny Peoples was on “Penetration,” too. He played in the Chessmen with Jimmie.

AA: What kind of music did these bands play?

SRV: It was rock’n’roll, rhythm and blues. He was always interested in all of that stuff. In the Penetrations, they did Sammy Laurie tunes. Obviously, they were into girls.

AA: How did you end up playing drums on “Empty Arms” [Soul To Soul]?

SRV: I wanted to!

SRV: No! [laughs] Me and the bass player [Tommy Shannon] were in the studio by ourselves, and he and I like to play bass and drums together. We were just messin’ around. When we started it off, that song was real slow, slow enough where it’s hard to keep going at the same speed. Then, we sped it up 13 1/2 % with the Varispeed and recorded the rest of the song to it. When we laid it down, it was like [sings very slowly], “DA…da DA…da DA…” Try to keep that tempo going without speeding up or slowing down. It’s hard!

AA: Besides Lonnie Mack, what were some of the other records you first played along with?

SRV: [The Yardbirds’] “Jeff’s Boogie,” of course. “Over Under Sideways Down.”

SRV: Yeah. Lots of Hendrix, of course. Clapton stuff with Mayall. Get your Rickenbacker bass and go crazy playing “Lady Madonna,” just like everybody. Did you do that, too?

AA: Yeah. The bass part was the whole song!

SRV: How many hours did you spend on it?

SRV: I got it right a couple of times, and then I ‘d start it over and screw it up!

AA: Did you listen to much T-Bone Walker?

SRV: Yeah. “T-Bone Shuffle,” “Stormy Monday,” “Cold, Cold Feeling.” A lot of ’em I don’t remember the names of; I just know the way they go. I had a bunch of his records.

AA: Were you listening to T-Bone before you heard Hendrix?

SRV: No, it was after, mostly. I listened to Hendrix first. See, I still listen to Hendrix, all the time–I doubt I’ll ever quit.

T-Bone was the first guy to play behind his head, and on his back, on the floor. Those were all T-Bone tricks. And Guitar Slim.

AA: Did you listen to jazz guitarists, like Kenny Burrell or Wes Montgomery?

AA: “Gone Home,” from Soul To Soul, is in that west coast, Kenny Burrell style.

SRV: Yes, it is. We play “Chitlins Con Carne” by Kenny Burrell.

AA: What other jazz guitar players did you listen to?

SRV: Wes Montgomery, a lot. Django [Reinhardt]. Grant Green. He’s got some tone, man! Jackie King. Fred Walters. The Wes stuff is his recordings with trios and quartets. My favorite Wes record, for some reason, had an orchestra on it; it’s called In The Wee Small Hours. God! Sometimes it sounds like Muzak, but what he played on it…Kenny Burrell played rhythm guitar on it.